An embryology laboratory is our best attempt to simulate the conditions inside the female reproductive tract where life begins.  Our embryology lab was designed from the collective research, knowledge and experience that our team of experts has gleaned over the last 25+ years.  The space is isolated from the outside world with tight seals and the environment is pressurized, which allows strict control of temperature, humidity and air purity.

The in vitro fertilization journey begins in a procedure room directly adjacent to the IVF lab, where a woman’s eggs (oocytes) are removed from her ovaries with a thin ultrasound guided needle while she is sedated.  Women typically go home within 60 minutes of their oocyte retrieval procedure. The harvested eggs are immediately transferred into a working incubator, called an isolette.  This allows our embryologist to identify the mature eggs under magnification and to prepare them for their introduction to sperm, a process called insemination. There are essentially two types of insemination.

Conventional Insemination involves placing oocytes into a drop of media in the presence of 50-100,000 sperm.  Overnight the sperm compete and make their way through the cumulus cells and zona pellucida surrounding each oocyte. When the first sperm successfully enters the egg, it triggers a chemical reaction in the zona pellucida that prevents any other sperm from progressing. This ensures that each egg is only fertilized by one sperm.

Intracytoplasmic sperm injection (ICSI) is the second method of insemination, and it involves directly injecting a single sperm into each mature egg. This procedure was first introduced in the 1990’s as a way of compensating for very low sperm counts or sperm with poor motility. Today there are many more indications for ICSI and most eggs in 2013 are inseminated by ICSI. At Atlantic Reproductive, approximately 80% of the eggs that undergo ICSI continue to develop. 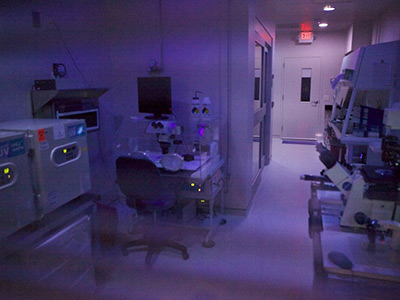 Interestingly, the embryos go through a stage of development called gene activation between culture days 3-5, which marks the first time that the embryos using their own DNA to begin directing their future. Expanded blastocysts are at the best stage of development for doing genetic analysis because the embryologist can safely biopsy the future placenta without harming the inner cell mass (future baby). If embryos are biopsied on culture day 5, they can be safely stored in a cryopreserved state while the genetic testing is being done.

At Atlantic Reproductive, all embryos are cultured to the blastocyst stage of development. Our ability to consistently produce high quality blastocysts allows us to “push” out to Day 5, improving our capacity to select the correct embryo for transfer. It also allows us to use the Select CCS platform for preimplantaion genetic screening. Select CCS is a clinically validated method to screen all 24 chromosomes of the embryo using a small piece of the trophectoderm (future placenta).

At Atlantic Reproductive we believe strongly in combining well established clinical practices with the newest validated laboratory methods for our patients. Vitrification is a method of cryopreserving your oocytes or embryos development so they can be stored for future use. Vitrification is superior to the more commonly used method of slow cooling because it decreases the chances for cell damage, improving patient outcomes.

Increasingly, assisted reproductive technologies are being used to help individuals and couples preserve their fertility for later conception. Fertility Preservation can be accomplished in the embryology laboratory at Atlantic Reproductive by either vitrifying blastocysts, as described above, or gametes (sperm or eggs). Indications for gamete cryopreservation include patients who are considering medical therapies that may harm their ovaries or testicles or for women who wish to delay childbearing and stop her biological clock while they are looking for the right partner or pursuing important education or career opportunities.